GDSC recently held their first Young Aquatic Helpers Course at the pool. Five, of the clubs current young swimmers took part on the course and are all now helping out in an active role within the club.

(Pictured below, left to right) Course attendee’s – Finlay Dawson, Amelia Nimmo, Freya Gidlow and Amelia Osborne with, (the not so young) head coach Mark Smith, after receiving their certificates from Swim England.

“They’ve all done fantastic, its great to see that our swimmers are wanting to help out, and pass on what they have learnt to younger, developing swimmers in the club. As a club run entirely by volunteers, their help is greatly appreciated” – Kieran Ferry, Workforce Coordinator.

The YAH course, which was delivered by the club, gives young swimmers (14 to 16 yrs old) an introduction to being an Assistant Teacher and is an official qualification from Swim England. With the success of the first course, the club is considering delivering it again in December this year.

Chairman, Nigel Stevenson, on behalf of the club, would like to thank Kieran for organising and taking the course and congratulate the attendee’s. 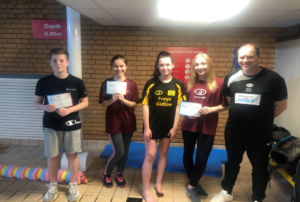